Exercise and the Childhood Obesity Epidemic 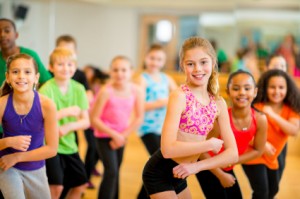 Exercise. Everyone needs it, but many people do not get enough of it.  Children, in particular, need at least 30 minutes of exercise a day to remain healthy.  Eric Chessen, founder of Autism Fitness, has noted that even neurotypical children not impacted by autism are living in a culture that has moved “away from health and fitness” with the “rise of fast food, sedentary lifestyles, and decreased outdoor play.”  In the past twenty years, obesity rates in children have tripled.  Obesity puts children at risk for increased health problems such as diabetes, high blood pressure, sleep apnea, etc.

“There are significant cognitive, emotional/self-regulatory/adaptive, and general physical benefits to being physically active,” Chessen reports, “I’ve spent time attempting to convince people that fitness is a cornerstone, not an addition, to programs for people with autism.”

Children with autism spectrum disorder (ASD) face many obstacles to participating in a regular fitness program due to delays in multiple areas of development including motor skills. Studies have found that children with ASD are often less active than their neurotypical peers with serious impacts on health.  Curtin et al (2010) found that children on the autism spectrum had an obesity prevalence of 30.4% compared to their neurotypical peers at 23.6%.  Exercise is especially critical for individuals with ASD because it promotes not only an increase in physical performance, but greater self-confidence and improved social skills.  Mike Frandsen, an experienced advocate for children with autism and other disabilities, has found that “improvement in balance and motor planning skills often go hand in hand with progress in cognitive function, academic achievement, and organizational skills.”  The long term benefits of improvements in these areas are that ASD children have an improved chance of integrating into the general population and leading independent, productive lives.

Research into the benefits of exercise in children with ASD supports the need for a physical fitness program for these children.

What does a successful fitness program for ASD children look like?

A well-designed and successfully implemented fitness program for ASD children should build on their strengths and provide a safe environment for children to address their challenges.  Eric Chessen also notes that “fitness programs for individuals with autism should have two main goals.  First, get them moving well, and second, find a way to make the movement enjoyable.”  Chessen states “the two biggest obstacles in promoting and introducing fitness to the autism population are: 1) accommodating the physical, cognitive, and adaptive/self-regulatory issues common to ASD; and 2) selecting appropriate physical activities.”  These obstacles are echoed by Lisa Jo Rudy, a parent to a child on the autism spectrum, who shared her advice and frustrations with the Autism Asperger’s Digest.  Eager to get her child moving, she enrolled him in a “special” soccer league, only to find out that soccer was an inappropriate activity for her child because of its high demands for non-verbal cues.   Rudy advises against large team sports like football, baseball, basketball, etc. and instead advocates parents focus their attention on getting their children involved in individual sports or in sports in which individual efforts are prized over team interaction.

Ballroom dancing is a perfect fitness choice for autistic children because it builds on the strengths of the child with Asperger’s syndrome and high-functioning autism (AS/HFA) by being a repetitive, one-on-one, visual activity. Ballroom dancing provides a forum for AS/HFA children to build the social and communication skills that are typically a struggle.  The classes are also a great way to gain self-awareness and build self-esteem which are typically low in the AS/HFA child.

The Barber National Institute created its own ballroom dance program for ASD teens.  Joseph Barber, a pediatric neurologist and the creator of the program, sees the ballroom dance environment as a “workshop for adolescents to overcome [social interaction] challenges” by “approaching someone and asking to dance, partnering up and maintaining physical contact, and trusting the other person’s movements.”  In addition, the American Dance Therapy Association believes that healing comes through movement. Dance therapy works to bridge the gap between the mind and body which is a problem in children with ASD. Dance therapy also uses a technique called mirroring in which the therapist has the client mirror the therapist’s movements. This not only helps coordination but also builds empathy and social functioning.

The Children’s Tomorrow Foundation is currently funding a ballroom dance program for AS/HFA children,Dance Dynamics.  If you would like your child to participate in this program, please fill out the contact form on the Contact page.

New Programs We Are Supporting

Apply for a Grant